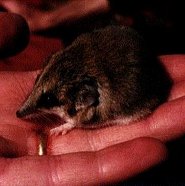 The Lesser Hairy-footed Dunnart (Sminthopsis youngsoni) is a tiny furry marsupial about the size of a mouse that is common in the desert areas of Australia including the Northern Territory, Queensland, the top edge of South Australia and Western Australia. It is of the family Dasyuridae and distinguished from the Hairy-footed Dunnart by its less hairy soles and smaller size. Marsupials are different from other mammals because when their young are born they are extremely undeveloped. The young of Lesser hair-footed dunnarts drink their mother's milk from nipples that are in a fold of skin on the stomach that acts as a pouch. They stay close to the mother until they can hunt for insects themselves.

A carnivorous mammal, weighing only 0.01 kg. (0.022 lbs.), it lives up to 5 years and the females have litters of up to 5 or 6 young once a year. Adults can be from 10 to 16 cm. (5 to 7 inches) long. It is usually seen in sandy plains, inter-dune habitats, sand dunes, tussock grasslands, hummock grasslands and open shrubland. They get all the water they need from the insects they eat so they don't require to drink free water.
It is listed in IUCN Red List of Threatened Species with a Least Concern (LR/lc) which is the designation for the lowest risk. There is a large population which lives in a number of protected areas including Uluru National Park and Rudall River National Park, so it is considered unlikely that the numbers will be declining at the rate needed to be listed as threatened. The only threats to the Lesser Hairy-footed Dunnart are not major. They include cats which were introduced to the habitat and frequent, huge fires, but these are considered only localized threats and are not a threat to the species.

It eats mainly insects including grasshoppers and crickets as well as spiders and other invertebrates. Even though it is tiny, the Lesser Hairy-footed dunnart is very brave and will fiercely protect itself if it feels threatened, but if there is no food available they can become torpid.

Picture of the Lesser Hairy-footed Dunnart by UtherSRG, licensed under GFDL

The Lesser hairy-footed dunnart is listed as Least Concern (LR/lc), lowest risk. Does not qualify for a more at risk category. Widespread and abundant taxa are included in this category, on the IUCN Red List of Threatened Species

Some facts about the
Lesser hairy-footed dunnart