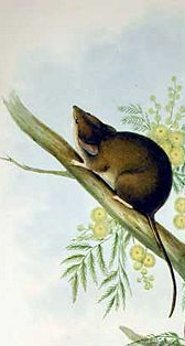 The White-footed Dunnart (Sminthopsis leucopus) is perhaps the least known of all the dunnarts. As marsupials, most dunnarts are found all throughout Australia, but the White-footed Dunnart is rarely observed. Easily mistaken for a mouse, this small, carnivorous creature is endemic to most of Tasmania, and the southeastern coast of mainland Australia.

White-footed Dunnarts are highly nocturnal, most active in the first few hours after sunset, and will eat a wide variety of invertebrates, mostly insects; they will feed on the occasional small reptile, however, such as skinks. Mostly terrestrial, they inhabit a variety of landscapes, including clay loams, coarse sand, and thick patches of heath; occasional tree-climbing has also been observed. They will often make bark nests inside rotting logs or under wood piles, and some will burrow in the ground.

After mating in the summer, female White-footed Dunnarts give birth in September or October, and up to ten joeys may be delivered. As semelparous creatures, the male will die shortly after the litter is born, and the female will not reproduce again either. At eight weeks old, the young exit their mother's pouch, continue nursing for an additional month, then disperse.

The White-footed Dunnart's total population is equally divided between Tasmania and the mainland, although accurate figures are elusive; the current estimate is less than 10,000 adults. Despite extensive surveys, this animal is rarely observed, and various factors contribute to its population decline. It is presently listed as "vulnerable", with logging, land clearing, and careless burning regimes diminishing its natural cover. This has led to increased predation by foxes, along with domestic cats and dogs. With mostly sparse, scattered populations, their genetic diversity is at risk, and human intervention, possibly through captive breeding, will likely be necessary in promoting the White-footed Dunnart's recovery.

The White-footed dunnart is listed as Data Deficient (DD), inadequate information to make a direct, or indirect, assessment of its risk of extinction, on the IUCN Red List of Threatened Species