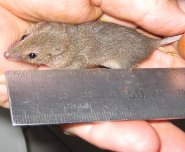 The Pygmy planigale (Planigale maculata) is a small marsupial which can be found in parts of Australia, as well as the islands of Groote Eylandt and Great Keppel. This creature's appearance resembles a cross between a mouse and a shrew.

When looking at this critter, it appears small, measuring 180 millimeters (18 centimeters) in length. The males of this species weigh 15 grams (0.53 ounces) and the females average around 11 grams (0.39 ounces). The resemblance is remarkably similar to that of the house mouse, with the exception of their pointy head and large round ears.

This small creature, whose scientific name translates as "spotted flat-weasel", is covered in coat of reddish or grey fur. Their underside is lighter in color and appears to be a mix between light grey and yellow. Their fur extends around the entire body, stopping at the tail which is almost completely naked. Their marsupial pouch is located on the bellies of the females opening towards the back. Females give birth to between five and eleven young at a time, who crawl into the pouch to suckle, and then emerge twenty-eight days later. These young go out on their own at seventy days old.

The pygmy planigale can be found in a variety of locations including rainforests, heathland, grasslands, forests, and marshlands. Generally, they prefer to live near water in places that have thick cover under which they can hide from their predators. Additionally, community nests built by the pygmy planigale have been found in the wild.

This nocturnal marsupial is a carnivore whose diet mainly consists of insects and arthropods. They are known to bite the bellies of insects in order to kill their prey where they are most vulnerable. This little creature has also been known to take down prey larger than itself, including small birds and lizards. The pygmy planigale needs to keep a lookout for their predators which include foxes, cats, and cane toads.

Although the pygmy planigale is not on the endangered species list, their numbers are not precisely known. Some members of the scientific community believe that they are being threatened as their natural habitat is being developed and destroyed.

The Common planigale, pygmy planigale is listed as Least Concern (LR/lc), lowest risk. Does not qualify for a more at risk category. Widespread and abundant taxa are included in this category, on the IUCN Red List of Threatened Species

Some facts about the
Pygmy planigale