Narwhal - The Whale with the Long Tusk 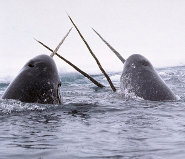 The Narwhal (Monodon monoceros) is a medium-sized whale that is found in the Arctic Ocean the year-round. It is one of the two whales of the Monodontidae whale family, the other being the Beluga. The male members of this species can be distinguished by a specific characteristic feature. They have a long and straight helical tusk which extends from their upper-left jaw. Mainly found in the Greenlandic and the Canadian Arctic Ocean, the Narwhal is exclusively known as an Arctic predator. Narwhal whales are being harvested since centuries by the Northern Canadian people to get ivory and meat and are continuously being hunted till date.

The weight of Narwhal males is ranging up to 3,500 lbs (1,600 kg) and the female Narwhals weigh 2,200 lbs (1,000 kg). Narwhals are pigmented with a white and black pattern. At birth, their color is dark but it becomes lighter with age.

The males are 13 to 16 ft (4 to 5 m) long with a tusk which is 9.8 ft (3m) long and they weigh about 22 lbs (10 kg). One out of 500 males has two tusks! These tusks normally occur when the small right incisor grows out. Female Narwhal produces a tusk but this happens very occasionally.

Narwhals have a rather specialized but restricted diet. Greenland halibut, Gonatus squid, shrimp, and Arctic and polar cods is on the menu. Additional things such as wolfish, skate eggs, and capelin are also found from their stomach.

Narwhals have shown seasonal migrations especially to ice-free grounds during summers, generally in shallow seas. In winters, they are primarily found in off shore areas, in deep waters below the thick layers of ice.

The most notable adaptation of Narwhals is their ability to dive deep. They can dive as deep as 2,400 ft (800m) below the sea which is the deepest dive ever recorded among marine mammals. Narwhals are gregarious animals and roost in groups. There can be five or more individuals in one group. In summers, several groups gather and form larger aggregations. Sometimes, males rub their tusks with another male's tusks showing dominance hierarchies.

The Narwhal whales are found in Atlantic and Arctic Oceans in areas near Russia, Greenland, Baffin Bay, Hudson Strait, and Hudson Bay. The total population of this species is estimated at approximately 75,000 individuals. Western Greenland and northern Canada are the areas where this species is found in abundance.

Besides man, orcas and polar bears are the main predators of Narwhals. Almost all parts of this species including its skin, meat, organs, and blubber are consumed. Blubber and raw skin of Narwhal whales called the 'Mattak' are considered delicacies, and tools and other art works are made using their bones. Keeping the Narwhals in captivity has been proved futile. The Narwhals, which were brought in captivity, could not survive for more than just a few months.

The Narwhal, unicorn whale is listed as Data Deficient (DD), inadequate information to make a direct, or indirect, assessment of its risk of extinction, on the IUCN Red List of Threatened Species

Some facts about the
Narwhal