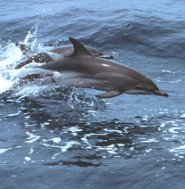 The Clymene dolphin (Stenella Clymene) is also called the Atlantic short-snouted spinner dolphin, helmet dolphin, and Senegal dolphin. These graceful animals are dark gray with a light gray underside and a band of medium gray that runs from the length of their body.

The are also characterized by the appearance of distinct black lips, which can actually resemble a mustache, and a line that extends over the upper ridge on their beaks.

The remarkable thing about Clymene Dolphins is that they prefer deep waters. They are usually found in water between 250 and 5,000 meters deep. This means that sightings of them are limited, and information on them is even more limited. They are labeled as being Data Deficient as there is not enough information about them to determine what their risk of extinction is.

Clymene dolphins grow to roughly 2 meters (six feet) long and weigh between seventy-five and eighty kg. (about 175 pounds) when adults. Information is not available on their size and weight at birth. Scientists also do not have much information on their breeding habits. They live an average of 25 years, but have been known to live as long as 40 years. They are found in the topical temperature ocean waters of the North and South Atlantic Oceans near countries from Eastern North America to West Africa. It is important to note that they are not found in waters outside of the Atlantic.

These dolphins dine on squid and small fish, eating between eight and fifteen kg every day. Their only real predator is man. Unfortunately, they are sometimes hunted and used as shark bait, and they are also accidentally caught in the nets of fisherman. They are protected under the MMPA, or the Marine Mammal Protection Act. This act affords dolphins protection in US waters.

Like their close cousins, the Spinner dolphins, Clymene dolphins will jump in the air and spin gracefully. They have also been reports of these dolphins approaching boats to "bowride". However, they are not known to spin as often, or with the same level of complexity as Spinner dolphins.

The Atlantic spinner dolphin, clymene dolphin, helmet dolphin is listed as Data Deficient (DD), inadequate information to make a direct, or indirect, assessment of its risk of extinction, on the IUCN Red List of Threatened Species

Namings for the clymene dolphin