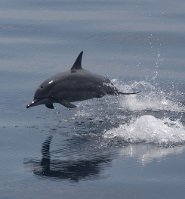 The Spinner Dolphin (Stenella longirostris) is a relatively common dolphin found across the globe; however the conservation status of this species is data deficient currently, so whether it is a threatened or non-threatened species is as of yet unknown. They live in tropical waters that are deep, and they occur in all oceans which have a tropical temperature, additionally they may congregate near shorelines as occurs in Hawaii. The largest population of Spinner Dolphin is between the Tropic of Capricorn and the Tropic of Cancer, as those waters are best suited for them. It is thought that the Hawaiian or Gray Spinner Dolphin is endangered due to many of the old fishing practices which would regularly entrap dolphins and end up killing them. Their main locations are divided up into several subspecies, and it is due to this along with the difficulties of actually counting and cataloguing this species that their current world population is unknown, however it is obvious that their numbers across the world were culled dramatically during the period of unsafe mass fishing. They are usually a dark gray with darker and differing patches of gray at the tail, on their backs, and on their throats. They will also usually have a lighter belly and their beaks, or nose, is very long and thin, and has a unique dark top that varies from each individual. In fact they are the most varied in colorations, as even though what has been said is common, from one dolphin to the next they are recognizably different. They weigh from 50 to 171 pounds (23 to 78kg), and measure from 4 to 7.5 feet (1.2 to 2.3 meters) in length, and it is known that they mature from seven to ten years, however how long they can live is unknown (but likely past 40 as is common in many other species of dolphin and cetacean).

A very active species, it is thought that when males are seeking mates they will perform their famous spin, which is when they leap into the air and spin on the way down. However it is unconfirmed if this behavior really is about mating, as it may also be a form of play or of communication as the noise made by slamming down will travel much further in water than in air. Their communication also consists of slapping the water with their fins, heads, backs, and possibly the aforementioned spin. They also are vocal, with clicks and whistles along with pulses which allow them to not only communicate, but through echolocation find possible food. They mostly feed on fish, jellyfish, krill, squid, and other creatures with soft shells - what is interesting is that before they dive down to feed they will form a grouping, and then descend and spread out while staying in constant communication at all times through their clicks and whistles, even if they are a mile apart. They are pretty much forming hunting parties that keep in constant touch in the case of danger from predators such as sharks.

There are four identified subspecies of Spinner Dolphin:

The Genus Stenella has four other species of dolphin within it, being the Striped Dolphin, The Clymene Dolphin, the Atlantic Spotted Dolphin, and the Pantropical Spotted Dolphin. It belongs to the family Delphinidae, which are the Oceanic dolphins. Within the family Delphinidae there are 17 known living genera, ranging from Orcas to the Bottlenose. Delphinidae belongs to the Superfamily Delphinoidea, which has seven known living and extinct families within it and contain such species as the Narwhal, Beluga, porpoises, and others. Delphinoidea belongs to the Suborder Odontoceti, which are the toothed whales and the largest being the sperm whale. Odontoceti belongs to the Order Cetacea, of which all whales are members. There are two unranked groups above Order and below Superorder to which all Cetaceans are members; they are Whippomorpha, which includes the hippopotamus and Cetartiodactyla of which whales and even toed ungulates. Currently because of the confusions, and changes needed, cetaceans may also be in a group called Cetruminantia which contains the Whippomorpha and also the Ruminants like cows. In any event, this all belongs to the Superorder Laurasiatheria (Bats to Carnivores to Horses) which belongs to the Infraclass Eutheria (placental mammals), which belongs to the Subclass Theria (All but monotremes) which belongs to the class Mammalia (every mammal alive).

They dive down to 3,000 feet to find prey, where they cannot see, and use their clicks as a form of echolocation to see their food without being seen.

Spinner dolphins are found in many aquariums around the world because they can be kept relatively easily in conditions that are favorable.

Over two million spinner dolphins were killed after what is called purse seine fishing for tuna fish was introduced, decimating numbers in the pacific and word wide. Although data is currently still not amassed to reach any conclusion, it is possible they are threatened or vulnerable to possible extinction in the future, and may be endangered, and also certain that at least one subspecies is indeed in need of conservation efforts. Populations have been reduced by an entire 80% since the 1950s, and if there are no steps taken more than one subspecies could go extinct sooner rather than later. Purse seine fishing is not only dangerous to the Spinner Dolphin, but will indiscriminately trap all sea life that is large enough, and kill it with no chance of escape. This has decimated countless species of dolphin and porpoise, and is one of the major threats to cetaceans left in the world since the ban on whaling.

The Long-beaked dolphin, long-snouted dolphin, spinner dolphin is listed as Conservation Dependent (LR/cd), the focus of a continuing taxon-specific or habitat-specific conservation programme targeted towards the taxon in question, the cessation of which would result in the taxon qualifying for one of the threatened categories below within a period of five years, on the IUCN Red List of Threatened Species

Namings for the spinner dolphin