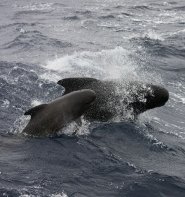 The long-finned pilot whale (globicephala melas) belongs to the dolphin family, but its behavior mimics that of large whales. Its bulbous-shaped head makes it distinctive. It looks like a cross between a whale and a dolphin. Colors range from dark gray to jet black. It may have markings of grey or white on its belly and throat. An adult male can grow to over six meters in length and weight up to 2.72 metric tons,while its female counterpart grows over 4.8 meters in length and weigh up to 1.36 metric tons. The long-finned pilot whale is named for the flippers comprising 15 to 20 percent of its body length.

The diet of the ling-finned pilot whale consists mainly of squid. If no squid are to be found, they will settle for octopus or fish. When feeding, dives can last up to 10 minutes and the whales will dive to a depth of 30-60 meters to locate their prey.

They are a very social mammal, traveling in large groups called pods. Leaders of the pod are adult males.
Pods of long-finned pilot whales have been known to beach themselves. They are so close-knit that when one whale strands itself on a beach the rest of the pod will follow suit. There have been reports that several hundred whales have participated in one mass beaching. While scientists are not sure why the whales do this, some speculate that it may be due to parasitic infections that cause neurological damage to the whale. These whales prefer sub-polar and temperate oceans. They also tend to inhabit deeper waters.

A unique aspect of the long-finned pilot whale is the fact that they have been used by the US Navy to find military equipment deep in the ocean. Due to this training ability, they are also found in exhibits in many aquariums and zoos.

Their main predator is man. Since they travel in large pods fishermen can catch many of them at a time. Other predators include large sharks and killer whales. The whale isn't considered endangered, but their numbers have been depleted in some areas of the world.

These whales are a unique mammal. If you have a chance to catch a glimpse of one either in the wild, or in a zoo exhibit, be sure to utilize it and see this dolphin-like whale.

The Long-finned pilot whale is listed as Least Concern (LR/lc), lowest risk. Does not qualify for a more at risk category. Widespread and abundant taxa are included in this category, on the IUCN Red List of Threatened Species

Namings for the longfinned pilot whale

Some facts about the
Long-finned pilot whale