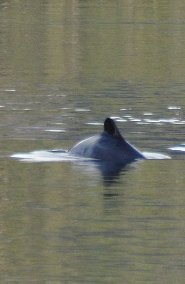 Black dolphins (Cephalorhynchus eutropia) are known by many other names such as Chilean dolphins, Chilean black dolphins, and white-bellied dolphins. These small cetaceans have blunt, beakless heads and a stock body shape. The average length of this dolphin is 67 inches (1.7 m) and a mature dolphin weighs around 132.27 lbs (60 kg). Their flippers and the large dorsal fin are round in shape. The color of the coat is gray but the ventral sides are light in color. There are white markings on their forehead, throat, lips, and in the area behind their flippers. There is a dark gray band round their throat. There are vertical lines known as fetal folds on a baby black dolphin. It is believed that before birth, the calf is tightly curved in its mother's womb.

Black dolphins are mainly found in cold water. Their habitats are in the shallow coastal waters of Chile, South America, Argentina, Cape Horn, Beagle Channel, and to the south of Isla Navarino. This species is thought to be highly gregarious since they roam about in small groups of 2 to 10 individuals. In the northern range, there are 20 to 50 individuals in a group. Valdivia near Chiloe and the gulf of Arauco are places where these dolphins are found in abundance.

Black dolphins like feeding on crustaceans, fish, and cephalopods. They also eat fish as anchovies, sardines, schooling fish, and squids. Their diet sometimes also includes green algae. There is no information about the reproduction pattern of Black dolphins yet.

Just like other species of dolphins, the black dolphins can also swim very fast. They can cover short distances rapidly with a speed of 20 mph. Then they sense any kind of danger, they swim even faster but at the same time, they get tired soon. At a normal speed, they can swim for hours and can cover long distances with a speed of 4 to 6 mph. Some population of the Black dolphins may migrate seasonally but others remain in one area through out the year.

In southern Chile, dolphins which accidentally get trapped in nets are used as bait to lure crabs or for human consumption. The complex channels and islands make it impossible to protect this species against hunting. The increasing aquaculture industry may have also invaded the habitats of black dolphins.

The Black dolphin, chilean dolphin, white-bellied dolphin is listed as Data Deficient (DD), inadequate information to make a direct, or indirect, assessment of its risk of extinction, on the IUCN Red List of Threatened Species

Namings for the black dolphin