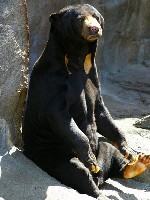 A Sun bear (Helarctos malayanus) stands approximately 1.2 m in length. It is the smallest member of the bear family, and therefore often called dog bear and probably the most aggresive of the bear family, and will attack without provocation. Relatively, they have the largest canines of all the bear species. They suffer from habitat loss and poaching. According to this article in a Bangkok newspaper, a new carnivorous species resembling the Malayan Sun bear has been discovered. The discovered fossil has been named Mae-mohcyon potisati Pigne and "strangely, the species can be compared with the Malayan sun bear which still exists. But unlike the Malayan sun bear, the extinct species could not stand on two feet." The discovered species had a dog-like head but bear-like body.

The Sun bear is also called "honey bear", they are the smallest and least known of all species of bears. Sun Bears could be discerned from the rest via its yellow or white mark on the chest (half-moon by shape). They are good climbers and they stay long periods in trees, and one good reason for this is they procure honey from the hives.

A Sun Bear's natural habitat is lowland tropical forest. One could weigh from 27 kilograms to 46 kilograms. The male Sun Bear is bigger than the female but just by a bit. The head is flat and short, tiny ears, coarse fur and going back to the chest patch, there are those without it.

On the average, the number of newborns are from 1 to 3, and gestating could run from 95 to more than 200 days. One Sun Bear in Berlin (zoo) reportedly gave birth twice in a single year, but that is quite unusual. The cubs remain with the mothers until they have totally grown. Behaviorally, they are active during nighttime. One could sleep and just laze in trees whose heights go from 2-7 meters. These bears do not hibernate, maybe because of the tropical habitat and the fact that their foods are available at all times.

Their main diet consists of termites, worms and bees. They also take in fruit if they chance upon it. In a way, they are like lizards, for they possess long tongues which are used for catching insects from the trees, the termites from the nests. It is known that they could eat rodents and birds too.

Their exact number at present is unknown, but it is surely on the decline due to hunting and deforestation. The latter means the lands are cleared to give way to rubber (and other kinds) plantation territories.

The Malayan sun bear, sun bear is listed as Data Deficient (DD), inadequate information to make a direct, or indirect, assessment of its risk of extinction, on the IUCN Red List of Threatened Species

Namings for the sun bear

A young / baby of a sun bear is called a 'cub'. The females are called 'sow' and males 'boar'. A sun bear group is called a 'sleuth or sloth'.

Some facts about the
Sun bear