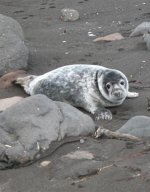 The grey seal (Halichoerus grypus) is a big "true" seal, the largest British Isles native mammal, that is the one and only classified species of the Halichoerus genus of the Phocidae family. It is found in subarctic and temperate shores on both sides of the North Atlantic ocean. There are three specified populations of this seal: the western Atlantic population found in Canadian maritime provinces from Cape Chidley on Labrador coast and extends to Nova Scotia; the population on eastern Atlantic on the British Isles and Faeroe Islands up to Iceland southwestern coasts; and the Baltic Sea population.

The grey seal's habitat varies among individual groups. Some are found along the coasts of rocky continental areas, while some are seen on solitary islands. There are populations on ice shelves and icebergs, too.

A grey seal bull can be 2.5 to 3.3 meters in length and almost 300 kilograms in weight. A cow is much smaller, about 1.6 to 2 meters in length and weighing around 100 to 150 kilograms. Pups already weigh about 16 kilograms when born. They become even fatter thanks to their mothers' milk, and they will gain mass four times more by the time they reach moulting period. Sex differentiation by color will manifest at this stage. The female has a grey-silver colour with dark spots scattered all over its body.

The bull has a darker shade of grey with lighter spots of grey silver. Both have darker backs and lighter bellies. The nose also tells the sex of this seal: the bull has a nose with a long arch and a roman profile while the cow has a narrower and shorter straight nose.

Grey seals eat usually by groups. They devour a lot of fish like sand eels cod, herring, flatfish, and skates. They also eat lobsters and octopus and other sea creatures. It is said that they need to eat about 5 kilograms of food everyday although they do not eat daily, and they actually go into fasting when breeding.

Picture of the grey seal by Porkeri, licensed under GFDL

The Gray seal, grey seal is listed as Least Concern (LR/lc), lowest risk. Does not qualify for a more at risk category. Widespread and abundant taxa are included in this category, on the IUCN Red List of Threatened Species

Namings for the gray seal

A young / baby of a gray seal is called a 'pup'. The females are called 'cow' and males 'bull'. A gray seal group is called a 'pod, colony, crash, flock, harem, bob, herd, rookery, team or hurd'.

Some facts about the
Gray seal