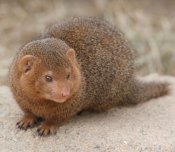 The Dwarf Mongoose (Helogale parvula) is the smallest of all African carnivores. It is about the size of a squirrel, has a short head, sharp nose, rounded ears, and a pelage that is both red-brown and glossy. They are found in the South Savanna, Somali Masai and also in Ethiopia and Namibia.

They live around termite mounds, woodlands and wooded vegetations and their diet consists of grasshoppers, crickets, beetles, scorpions, spiders, lizards, snakes, some vegetables, fruits... The Dwarf Mongoose is diurnal, but sometimes their habits change, influenced by the weather. The Dwarf Mongoose lives with packs, and these packs "own" territories that are about 85 acres in size.

There is a breeding pair, and this is made up of the older female and male, and they monopolize breeding. The monopoly is theirs only for as long as they are dominant, which would last up to many years. Females would lead the group, it is the male's job to lookout and be aware of external threats and attacks from rival groups. The other members are the ones to care for the newborns, liberating the mother from the obligations of feeding her young. Thus, instead of feeding the young, the mother has all the time to feed and take care of herself. The newborns would leave the den after 3 weeks, and would start foraging (not alone) after a month. They would emit alarm calls when they see flying predators approaching.

The Common dwarf mongoose, dwarf mongoose is listed as Least Concern (LR/lc), lowest risk. Does not qualify for a more at risk category. Widespread and abundant taxa are included in this category, on the IUCN Red List of Threatened Species

Namings for the dwarf mongoose

A dwarf mongoose group is called a 'mongeese or mongaggle'.

Some facts about the
Dwarf mongoose