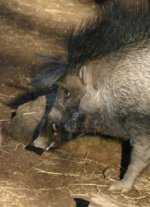 The Philippines may just be slightly more than a dot when you view it from a giant world map, but it is home to some of the most unusual animals in existence. According to the history books, these forest-living pigs have only been acknowledged as a separate breed in the early nineties. I am referring to the Visayan Warty pigs (Sus cebifrons). The Visayan Warty pig may have been discovered just recently, but from all indications, they have been around for a very long time. At present, they are already being labelled as 'critically endangered'. (if estimations are indeed correct, these pigs are the most critically endangered among all wild pigs on the face of the globe.)

When mating season comes, a Visayan Warty pig would grow manes, giving it a Mohawk facade. The Visayan Warty pig has 3 sets of bumps found on the face. The world's biologists contend that these bumps serve a crucial role: protection against tusks when facing off another Visayan Warty pig, or maybe any tusked animal for that matter.

The Visayan Warty pig holds notoriety in the Philippines for raiding crops, and they are ordinarily seen in sets of 4 or 5, but a group of 12 is not impossible. The piglets are seen on dry season, and speaking of piglets, the litter usually holds 3 to 4. It is capable of eating any of the following: fruits, roots and cultivated vegetables.

Let us go back to their 'endangered' state, why is this so? They are native to 6 islands of the country, and they are already threatened on 4 of those 6. Not only due to the loss of habitat, but other causes include the farming system of slash/burn and also interbreeding with the other kinds of pigs. Lastly, the damage done by these pigs to the crops of citizens has given rise to irritation/anger from the farmers/planters, which in turn results to hunting.

The Visayan warty pig is listed as Critically Endangered (CR), facing an extremely high risk of extinction in the wild, on the IUCN Red List of Threatened Species

Namings for the Visayan warty pig