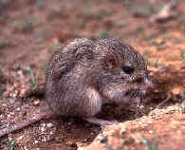 The desert pocket mouse (Chaetodipus penicillatus) lives in the desert regions of the southwestern United States, including Nevada, Arizona, parts of New Mexico, Texas and California, the Baja Peninsula and northeastern Mexico. It prefers dry, sandy regions with little vegetation. It's not generally found in rocky areas.

Interestingly, there's no evidence a desert pocket mouse drinks water. It seems to extract as much water as it needs from the seeds it eats. This helps it to live in an arid desert climate.

The average length of a desert pocket mouse is 180 millimeters, or seven inches. Of that length, more than half--about 110 millimeters--is its tail. Average weight varies from 11 to 22 grams, or .39 to .77 ounces. It has coarse fur that's grayish brown on its back and whitish on its underside. It has no lateral line or rump spines. Its feet are whitish, and its hind feet are about 25 millimeters long.

The desert pocket mouse has sharp front incisors that help it to break through hard, dry desert soil to search for buried seeds. They tend to be solitary animals who forage at night. They compete with other members of the Heteromyidae family for food. It has natural predators, such as owls, but is not currently in danger of extinction.

The average lifespan for a desert pocket mouse is just one year whether in the wild or in captivity. During that year, a female may bear one or two litters from early spring to late summer. On average, gestation takes 23 days and a litter consists of four young, though it could be as few as one or as many as seven.

The Desert pocket mouse is listed as Least Concern (LR/lc), lowest risk. Does not qualify for a more at risk category. Widespread and abundant taxa are included in this category, on the IUCN Red List of Threatened Species

Namings for the desert pocket mouse