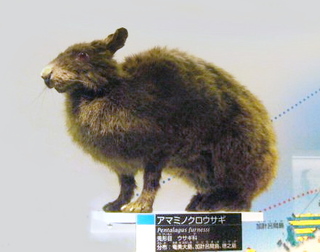 The Amami rabbit, ryukyu rabbit is listed as Endangered (EN), considered to be facing a very high risk of extinction in the wild, on the IUCN Red List of Threatened Species

Namings for the Amami rabbit

A young / baby of a Amami rabbit is called a 'bunny, kit, kitten, leveret or nestling'. The females are called 'doe or jill' and males 'buck or jack'. A Amami rabbit group is called a 'warren, nest, colony, bevy, bury, drove or trace'.

Facts about the Amami rabbit

Amami Rabbit or Pentalagus furnessi is listed on the IUCN Red list (1996) as Endangered due to A2b, B1+2bce, C1.

Abstract: The Amami rabbit Pentalagus furnessi is a rare forest-dwelling form endemic to the Amami and Tokuno Islands in Japan.

Often called a 'living fossil,' the Amami Rabbit is a living remnant of ancient rabbits that once lived on the Asian mainland, where they died out, remaining only on the two small islands where they survive today.

The Amami Rabbit is a short-eared, black primitive species of rabbit which is found nowhere else in the world but two islands in Japan, the Amami Islands in Kagoshima Prefecture.

Nocturnal and forest-dwelling, with short ears and no tail, the Amami rabbit is a very distant relative of the bunnies we know, separated by millions of years of evolution.

Amami Rabbits are also noted for making calling noises, which sound something like the call of a pika (most rabbits cannot make calling noises). (Full text)

Amami Rabbits are also noted for making calling noises, which sound something like the call of a pika; this makes them unique as most rabbits cannot make calling noises.