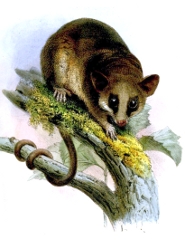 The murine mouse possum (Marmosa murina) is also known as the common mouse possum or Linneaus’s mouse opossum. But no matter what you call it, this is a small marsupial with huge eyes and no pouches. It also has the largest ears and part of the brain devoted to hearing, in comparison to its brain size, than any other mammal on the planet.

The murine mouse possum lives in the forests of South America near water sources, but has adapted to living near houses, orchards and cultivated fields. Countries it can commonly found in are Bolivia, Brazil, Columbia, Suriname, Guyana, Trinidad and Tobago, Venezulea, Peru and Ecuador. Unlike other marsupials, the common mouse possum is not endangered. There has been an effort in North America to breed the murine mouse possum for the pet trade.

As its name suggests, the murine mouse possum looks like a cross between a brown mouse and an opossum. Since the creature is nocturnal, the eyes and ears are huge in comparison with the head. The short, dense fur is shades of brown with a dark raccoon-like "mask" going over the eyes. The nose is pointed and pink-tipped. The belly, inside of the legs and chest are pale grey or white.

Adults reach a body weight of 8.8 ounces (250 grams) and a length of 4.3 to 5.7 inches (11 to 14.5 centimeters). But the body is far shorter than the spectacularly long tail, used as a fifth limb to help keep balance in tree branches, for storing body fat and for carrying nesting material such as leaves. The long, softly furred tail reaches lengths of 5.3 to 8.3 inches (13.5 to 21 centimeters).

Murine mouse possums eat a varied diet mainly of insects but also include birds’ eggs, newly hatched chicks, small lizards and fruit. They live solitary lives as adults. Their best defense from predators such as birds of prey or domestic dogs is to run and hide in such places as old bird’s nests and rotting tree logs.

Females take sole responsibility for raising the young. Mating is a ritual that can last hours. Because she is a marsupial, has an extremely short gestation – a mere 13 days. During this time, she constructs a nest made of soft materials like leaves. She has about 6 babies per litter. With luck, the babies will live for another three years.

The Murine mouse opossum is listed as Least Concern (LR/lc), lowest risk. Does not qualify for a more at risk category. Widespread and abundant taxa are included in this category, on the IUCN Red List of Threatened Species

Namings for the murine mouse opossum

A young / baby of a murine mouse opossum is called a 'joey'. The females are called 'jill' and males 'jack'.

Some facts about the
Murine mouse opossum