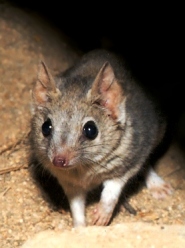 The Kowari (Dasycercus byrnei) is a small carnivore marsupial that lives in the central areas of Australia that have dry grasslands and also the deserts. It is similar in appearance to a mouse or a gerbil, however it is known as a very efficient predator of spiders, insects, small lizards, and other small animals. It grows to 18 centimeters (7 inches) in length and has a 14 centimeter (5.5 inch) long tail. They are light on their feet, very quick, and are usually a molted brownish ash color, with a lighter underbelly, and the same light to white fur on their legs. They have large ears, eyes, and an excellent nose, and can track prey and strike with lightning speed.

The Kowari is a part of the genus Dasyuroides, which it is the only member of. They are a part of the tribe Dasyurini which contains many other species and genus, such as the Qualls, the Kaltula, Masupial Shrews, and Tasmanian Devil. The tribe belongs to the subfamily Dasyurinae which has one other tribe besides Dasyurini. This belongs to the family Dasyuridae which is furthermore in the Infraclass Marsupialia. They share this infraclass with six other living orders, and two known extinct orders. However the Kowari is known for being an exceptionally talented climber when the chance to do so presents itself, and it is especially adept at scaling large rocks. In addition to being an adept climber, it can also jump straight up from the ground to 45 centimeters in the air (18 inches). The Kowari has no real set on whether it is a loner or if it lives with others, as both have been observed. Their burrows can become complex as more live in the same one, and serve as a hiding place for most the day. As mostly a nocturnal creature, it will sometimes very rarely be seen out during the day; however some have been observed hunting in broad daylight, but mostly they come out to bask in the sun and use sand bathing as a form of cleaning behavior.

They have a set breeding period in the winter months of Austrailia, being between may and October, with a usual gestation (preganancy) time of around a month, and the litter will have between four and six newborns. Because of the short length of time it takes for gestation and maturity, it is possible for females to have two litters in a single winter. Weaning takes place after three months, and the young are adults within eight months after birth, however they live independently right after weaning from the mother’s pouch. The lifespan is between three to six years, while the maximum age for fertility seems to be around four years of age.

Picture of the kowari by Kořínek Milan, licensed under GFDL

The Kowari is listed as Vulnerable (VU), considered to be facing a high risk of extinction in the wild, on the IUCN Red List of Threatened Species