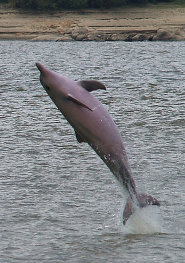 The tucuxi (Sotalia fluviatilis) is also called the bufeo negro, the grey dolphin or the marine tucuxi dolphin. "Tucuxi" is pronounced "too koo she." It is unknown how many of these rare dolphins are left. It is also unknown what natural predators feed on them except people. Many dolphins die due to water pollution and from getting caught in fisherman’s nets. Since dolphins need to breathe air, they soon drown in the nets. River dolphins can become stranded when rivers hit their lowest during the dry season.

Both subspecies strongly resemble a small

" The upper part of the body varies from a light grey to a blue-grey. The bottom part varies from a pinkish-white to a pearly white. White spots may appear on the tip of the triangular dorsal (top) fin and the tip of the nose. The dorsal fin is often hooked or curved at the top.

Tucuxi prefer to live in small pods or family groups from 15 to 50. The salt-water subspecies tend to live in larger pods. Males do fight for females, which then mate with more than one male if presented with the opportunity. Both subspecies eat fish and shellfish. Since the water is dark and hard to see through, they rely on echolocation in order to find prey and to navigate. Females of both subspecies have a gestation of 11 to 12 months and give birth to a single calf, often in November.

Tucuxi are most active at dawn and at dusk. They are less playful than other dolphin species, but sometimes leap out of the water. With luck, a tucuxi can live to be 35 years old. They do not do well in captivity.

Picture of the tucuxi by Archilider, licensed under the Creative Commons Attribution-Share Alike 3.0 Unported and GFDL.

The Estuarine dolphin, gray dolphin, guianian river dolphin, tucuxi is listed as Data Deficient (DD), inadequate information to make a direct, or indirect, assessment of its risk of extinction, on the IUCN Red List of Threatened Species

Namings for the gray dolphin

Some facts about the
River dolphin