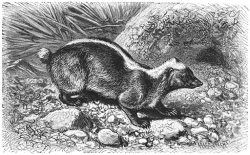 The Javan Stink badger (Mydaus javanensis)is confined to an isolated distribution at the Indonesian territories of Java, Sumatra, North Natuna, and Borneo. On the average, they stay at an elevation of 2100 meters. They are known to inhabit shallow underground burrows, but in Borneo, it's a different story. They could stay inside caves (at high elevations).

If ever there is such a thing as a GENUINE BADGER, the Javan Stink badger is the one. Once upon a time, they were confused with skunks due to their colorations, but at present, the experts have corrected the mistake.

Reproduction-wise, the female gives birth to 2 to 3 newborns, a litter is reared in the underground shelter. Basically, they are nocturnal, and it is at night that they feed. In the day, one would stay at the burrow. These tunnels are about 6 feet in length, and the bedding part has a diameter of many feet- and these they try to hide. To conceal their shelters, they put twigs at the entrances.

Diet of these badgers: worms, insects and also plant matters. The known attackers of these badgers are the javan-hawk eagles, the civets (particularly the Viverridae) and tigers. If it is under attack, or when it feels under attack, one would raise the tail, then let go of a foul, milky green product, and this secretion could indeed be emitted with accuracy, as per the observations.

Interesting fact: This has been noted- dogs could be asphyxiated by the secretion, that or if hit in the eye, could get blinded.

The Malayan stink badger, sunda stink badger is listed as Least Concern (LR/lc), lowest risk. Does not qualify for a more at risk category. Widespread and abundant taxa are included in this category, on the IUCN Red List of Threatened Species

Namings for the Sunda stink badger