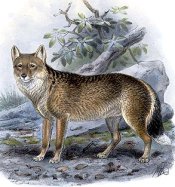 The Falkland Island Fox is extinct. The scientific name of the Falkland Island Fox (Dusicyon australis) means "foolish dog of the south", referring to the absence of fear towards humans. This does not necessarily mean they are aggressive, it simply meant that were not able to comprehend how dangerous man could be to them. They were the sole predators at the island, and that was why maybe they were put into a false sense of security.

First sightings were in 1692 by Captain Strong. Around 1833 or thereabouts, settlers thought of this fox as a danger to the sheep, and out of fear, they set up massive shooting and poisoning. This extermination movement succeeded, and common sense dictates that this campaign was one major reason for the Falkland Island Foxes going extinct. One manner described in these documents in the way of killing the foxes: hold out a piece of meat, and with the other hand, have a knife ready for the killing. In 1868, a live one was captured and taken to the London Zoo, but it did not live for a long time.

The Falkland island wolf, falklands wolf is listed as Extinct (EX), there is no reasonable doubt that the last individual has died, on the IUCN Red List of Threatened Species

Namings for the Falkland Island wolf