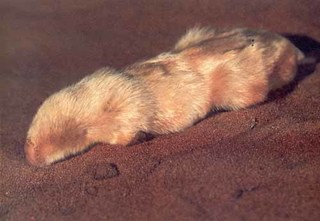 Marsupial moles, belonging to the order Notoryctemorphia, have two separate species: Notoryctes typhlops and Notoryctes caurinus. These mammals are practically a mystery to the rest of the world due to the fact that they spend most of their lives undergound and on the constant move. They only come above ground on occassion, usually after it rains. They are completely blind because their eyes are simply vestigial lenses located under the skin. Their ears are not external, but instead, are tiny holes buried under thick hair. These moles do not create permanent burrows, but it almost seems as though they "swim" through the sand. The sand fills in the tunnel behind the mole as it moves forward. An awesome, unusual characteristic of these mammals is that their pouch faces backwards. This prevents the pouch from filling up with sand as it travels underground. Amazingly, these creatures only have two teats so they cannot raise more than two young at a time.

Another unique feature is that the neck vertebrae are fused together to give the head more support and stiffness during the digging process. The Southern Marsupial Mole is known to suddenly "faint" when above ground for several hours until it is disturbed.

The Southern Marsupial Mole (N. Typhlops) can be found in the central sandy regions of western Australia, northern South Australia, and the Northern Territory. The Northern Marsupial Mole (N. Caurinus) is found in hot deserts of western Australia. They prefer a habitat with soft sand because their claws were not made to dig through hard earth. Their third and fourth digits prove to be similar to spade shovels. The depth that these mammals choose to borrow is directly related to heat. If they are too hot, they burrow deeper, and if they are not warm enough, they travel up closer to the surface. It is hard to find all the differences between these two species because they are so similar. On average, five to fifteen are captured in a ten year period and the ones captured are either dead or dying. One was captured in good health and only survived eight weeks in captivity.

These creatures feed mainly on beetle larva and cossid caterpillars and the Southern Marsupial Moles are known to feed also on earthworms. They are often hunted by foxes and possibly some cats. They range from 12-16 cm (4-6 in) long without including the tail, and weigh approximately 40-70 grams (1.2-2.5 oz). The Northern Marsupial Mole is known to be slightly smaller.

Marsupial moles belong to the Kingdom Animalia and the Phylum Chordata. Their Class is Mammalia, as they are mammals, and their Infraclass is Marsupialia. The Order being Notoryctemorphia and the Family being Notoryctidae. Their Genus is Notoryctes. The two species, as previously mentioned, are Notoryctes Typhlops and Notoryctes Caurinus.

We have no way of knowing how many of these creatures exist to even know if they are close to being extinct or endangered. However, they are considered to be endangered simply because we don't know nor do we really have any way of knowing.

Picture of the marsupial mole by Bartus.malec, licensed under GFDL