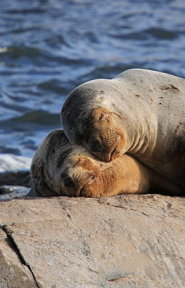 They could be sighted at the offshore islands of South America, North Peru and even parts of Ecuador. Their estimated numbers are as follows: 30,000 at Peru, 90,000 at Argentina and 3,000 at Falkland islands. At Brazil, just a few hundreds exist.

The female South American Sea Lions reach sexual maturation at four to six years, while the males reach it in five to six years. Pups are born just 3 days after the female's arrival in the nesting grounds (called rookeries). The male newborns average weight is 13.7kgs, while the females are 12.3kgs at average. Females (the parent) would usually mate about a week after birth, then, the feeding cycle would commence. The pups start swimming after a month, and when they reach 2 months old, they are already capable swimmers.

In the 19th and 20th centuries, they were hunted excessively, and it depleted a great part of their numbers. Furthermore, he salmon fishing line of Chile has caused these sea lions to get entangled in the nets. In the mid 90's, the Chilean government banned the "destruction" of the South American Sea Lion for five straight years.

There is another reason for the decline of their numbers, and this one is not to be blamed on mankind: the El Nino. At Peru and Chile, it had been reported that the El Nino of 97-98 greatly cut down the overall numbers of these animals.

Interesting fact: The less "courageous" males unable to set up territories have been observed to assault undefended females, and the pups too. In some cases, they would try to mate with it, killing it inadvertently.

Picture of the Mother South American sea lion and pup by Carlos Ponte, licensed under GFDL