Swim with manatees, harmful or helpful? 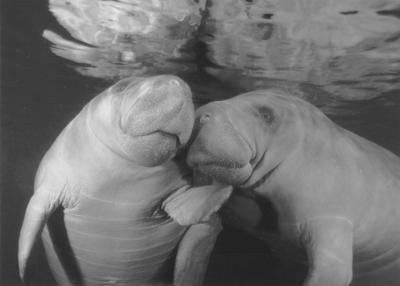 Swimming with manatees is possible in Florida in the United States. You can hire a boat or book a tour to see these cute giants. Manatees consume 10-15% of their body weight every day, they pretty much eat all day... You can swim with a manatee as long as you don't "intentionally or negligently, to annoy, molest, harass, or disturb any manatee". This includes feeding the manatees.

Classification of the manatee

Manatees along with dugongs are sometimes nicknamed "sea cows", because like cows they are bulky herbivores in the water. However, the only animal scientifically known as a sea cow is the extinct Steller's sea cow. It got its name from the Georg Wilhelm Steller who got shipwrecked on Bering Island and started to record data on the flora and fauna on the island. To keep themselves alive, the survivors of the shipwreck, started hunting the sea cows. Along with hunting from people who heared the stories of Steller when he returned to Russia, they hunted the "Steller's sea cow" to extinction.

To ensure the survival of the manatees in Florida, they are listed as a threatened species. This means a population reduction of at least 50%(!) projected or suspected to be met within the next ten years or three generations, whichever is longer. Researchers have found that Manatee bones have no marrow cavity, which makes their bones fragile. Although manatees can hold their breath for as long as 20 minutes, the slow-moving mammals must come to the surface to breathe air periodically, and are thus vulnerable to being struck by propellers and hulls of powerboats. To save the manatees, there are speed limits in the Florida waters, avoiding fatal accidents, but still wounding the manatees.

Tourism to the rescue?

In the winter, manatees migrate to the warm waters of springs and power plants in Florida. Swimming with manatees is booming business, you can rent a boat and snorkeling equipment, take a tour, and they even put in a fishbowl in the Homosassa river. Some argue that any contact with manatees is harmful, because the manatees will lose their natural fear for humans, and no longer avoid dangers. Most manatees die because of boats travelling at high speeds, which they cannot avoid. Speed limits are enforced and discussions about propeller guards are ongoing. As long as you follow the rules of engagement, you can safely swim with manatees without helping their decline...